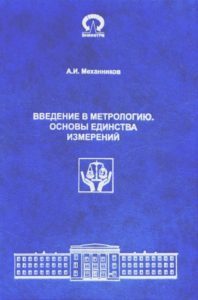 The main trend of metrology in recent decades is the revision of definitions of basic physical quantities and the materialization of the corresponding standards with the implementation of tunnel and other quantum effects in them. Thus, the unity of the microcosm becomes the service of the unity of measurements. The book sets out the new achievements in physical metrology, the principles of operation of the original measuring instruments, as well as some physical experiments that are adjacent in their formulation and approaches to precision metrological measurements. Some organizational, methodological and legislative issues of metrological activity are also briefly reviewed.
The publication is useful for experimental physicists who use precision measuring instruments, graduate students in the specialties of “Instruments and Methods of Experimental Physics”, “Metrology and Metrological Support”, and “Radiophysics”, as well as for students mastering a course in physics.

The reference book describes the characteristics of 104 neutron fields (spectrum, flux density, fluence, dose, number or speed of dosimetric nuclear reactions, etc.), 50 nuclear-physical facilities (nuclear reactors, critical assemblies and neutron generators), which are widely used to solve important scientific and technical problems in the nuclear industry. The characteristics of the neutron fields of nuclear physical installations (NPI) are determined by the standardized neutron activation method using the CASCAD program. The handbook also contains differential cross sections for nuclear reactions that took place in neutron-irradiated detectors, decay constants for radionuclides — products of detector activation by neutrons (half-lives, radiation composition), which were used to reconstruct the spectra of NPI neutrons.
The handbook is intended for scientists, engineers, graduate students and university students specializing in neutron radiation spectrometry and dosimetry; in the study of radiation effects of neutron radiation on devices, equipment and bioobjects used in science and technology; in nuclear physics; in neutron radiation metrology.

Radio receivers used in television, radio communications, radio astronomy, as well as semiconductor electronics, radiolocation and optical communications dictate the requirements for techniques of measuring radio-noise parameters (incoherent electromagnetic radiation) in a wide spectral range and to the relevant standards — the original means ensuring the uniformity of measurement of the parameters of this type of radiation.
Just as control of transmitting devices with their coherent radiation is carried out by wattmeters, so to control the sensitivity of receiving devices, measures of radio noise are necessary — generators of incoherent radiation of known intensity. The theory of emission of electromagnetic waves by heated bodies, which was in due time the start of quantum theory, is the theoretical basis in the metrological practice of standardizing the electromagnetic incoherent radiation — fluctuations of electrical nature.
The ability of receiving devices of radio systems of various purposes to detect and distinguish signals from the radiation sources under study is determined by their sensitivity, limited by the noise of the receivers themselves and by other sources. Registration of the radiation of celestial bodies, their level and spectrum belong to the basics of astronomical observations and astrophysical research. Appropriate measurement techniques that assesses the quality of receiving devices can be compared with the tools of ophthalmologists who develop methods for diagnosing and treating organs of vision.
The book sets out the physical fundamentals of thermal radiation and the technique of standardizing the energy parameters of incoherent electromagnetic radiation in the whole range of the spectrum. The book is useful for experimental physicists who apply precision means of measuring the intensity of radio noise, as well as for students mastering a course in physics, and graduate students in the specialties of “Radio Physics”, “Instruments and Methods of Experimental Physics”, “Metrology and Metrological Support”.

The results of studies of the system of modeling neutron reference fields (MRF) at nuclear-physical installations (NPI) of enterprises of various departments of the Russian Federation are presented. This field system has found wide application in the graduation of standard equipment for control systems and protection of nuclear reactors; when evaluating the radiation effects of neutrons on devices, equipment and bioobjects; when conducting neutron research on the physics of nuclear fission, etc.
The methods for modeling and reconstructing the neutron spectra of NPI are given. The method for reconstructing NPI neutron spectra implemented in this work is analyzed in detail. It is based on representing it as a superposition of physically justified spectra: instant neutrons of nuclear fission in the form of watts, Weisskopf evaporation neutrons, Maxwell thermal neutrons, epithermal Fermi neutrons, monoenergy neutrons in the form of Gauss, etc.
The main regularities of MRF formation in slowing-down media of various types of nuclear reactors and neutron generators are considered. A brief description of a number of MRFs that have found application for solving a number of important scientific and technical problems is given. A know-how method was developed to evaluate the correctness of the system, of the most studied and widely used in the practice neutron measurements, integral sections of dosimetric nuclear reactions.
The book is intended for students, graduate students, researchers, specializing in spectrometry and dosimetry of neutron radiation. It can be useful for specialists studying the radiation effects of neutron radiation on various objects.

Markov A.I. Contractometry as a scientific basis for the design of composition of concrete mixes (2015, in Russian)

The monograph describes the theoretical and experimental provisions of the contractional express-method for determination of the kinetic characteristics of the structure of the hardening concrete. They are based on the notions of a leading and, as a rule, even an exceptional role in the strength set up of concrete of such a parameter of the structure as the density of an aggregation of crystalline hydrates. Theoretical ideas about the connection of the density of the aggregation of hydrates with the strength factor of concrete in simple and complex stress state are developed. The experimental justifications of the accepted theoretical provisions are described in detail, which may be of great value for novice experimenters. A deeply developed critical review of works on the theory of concrete and the experimental justification of its provisions, based on an analysis of more than half a thousand literary sources, is presented.
The monograph is of interest to a wide range of scientists and specialists in the field of technology and production of building materials.

The purpose of this monograph is to present the theoretical foundations for the creation of modern mathematical models of frequency standards, and on their basis, ensembles of clocks and time scales.
The book consists of 10 chapters, divided into two parts. The source was the modern works of many authors, to which references at the end of each chapter are given, some calculations were made independently and arranged in the form of sentences. In this case, the authors tried not to abuse the calculations, so as not to overload the text and not go too far from the main goal. They did this solely to demonstrate analytical methods and mathematical apparatus in the most important and interesting cases, especially since only the final results, as a rule, are given in the literature, without specifying the conditions for their applicability.

The monograph presents the results of theoretical and experimental studies of heterogeneous systems by their stability in order to identify the temporal and spatial evolution of these systems.
Methods and measuring instruments of dispersed parameters of heterogeneous systems are theoretically and experimentally analyzed.
The conducted research helped to develop the State primary standard for units of dispersed parameters of aerosols, suspensions and powdered materials GET 163-2010, which allows metrological support of almost the entire fleet of measuring instruments used.
The monograph is of interest to a wide range of scientists and specialists in the field of heterogeneous systems.

The monograph is devoted to the systematic presentation of the issues of relativistic metrology of time storage systems, systems of near-Earth space navigation, geodesy and synchronization. It includes four interrelated parts. The first part considers the evolution of the physical content of relativistic metrology and the experimental foundations of the general theory of relativity as the basis of relativistic metrology. In the second part, the metric properties of proper time and distances in the stationary gravitational field on the surface of the Earth and in near-Earth space are investigated.
The methods of relativistic synchronization of stationary and mobile clocks are proposed and analyzed. In the third part, the optical model of the gravitational field is developed as applied to the rotating geocentric earth reference system ITRS. The electrodynamics of continuous media moving in gravitational fields of various nature is being developed. The basic formulas for the propagation parameters of radio waves are derived based on the optical model of the near-Earth gravitational field. The fourth, applied part deals with the calculation and compensation of relativistic effects in the onboard clock synchronization systems of the space navigation systems GLONASS, GPS, GALILEO and BeiDou; relativistic effects in synchronization systems based on cosmic radio links and fiber optic communication lines; relativistic errors of navigation and geodesy systems, as well as the results of new relativistic experiments conducted under the guidance of the author.
For scientists, engineers, graduate students and students engaged in research, development and application of high-precision time, navigation, geodesy, synchronization and communication storage systems. May be useful for teachers of technical universities.

The additional information on publications, issued by VNIIFTRI, is presented at the institute’s official website.